It’s pretty rare for a book to take me by surprise.  I’ve just read so many.  Not to brag or whatever, it’s the simple truth.

And yet, The Sweetness at the Bottom of the Pie by Alan Bradley did just that.  Since that book, I have gobbled each and every sequel with an anticipation that defies waiting for any reason. 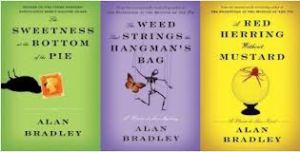 Flavia de Luce is, for me, a combination of Wednesday Adams and Nancy Drew.  I’ve heard many another combinations.   Why?  Because Flavia is too complicated to be described simply.

Her story is set in the 50s in small town England.  She lives in a giant house with her father, her two older sisters.  There are two servant types, but they aren’t your typical souls any more than Flave is–  That all being said, Flavia is a brilliant, eleven-year-old chemist.  Obsessed with poisons.  That’s right poisons.

She’s so brilliant, in fact, that she manipulates the world around her with ease.  She out sleuths the police.  All the while dealing with the torture only siblings can deal out, ignoring the money trouble of her family, and entirely disregarding the fact that she is only eleven.

I’ve just finished the fifth book which was a pleasure from beginning to end.  Alan Bradley’s portrayal of his unique character is always spot on, and there were several times the sheer magnificence of his writing made me pause, admire, and re-read.  Be warned, however, an anticipated plot point comes to conclusion in this book, makes something of a cliff-hanger, and leaves you desperate for the next book–which won’t be out until early 2014.

It would be hard for me to find a series I recommend more than Flavia de Luce.  There are a few, but the brilliant originality of this series is not to be missed.